Recently, Kotaku published a comprehensive piece that addressed sexism at Riot Games in great detail. It is a lot of information, but it’s very important—especially because the amount of information to report was so extensive. Sexism is a big problem in any industry, but the piece got me thinking about how women in the video game industry are subject to a type of sexism you don’t see in other environments.

Women are treated differently than men in workplace settings across many industries. That is a fact. Even though your instinct might be to deny it. However, sexism in the gaming industry manifests in unique ways because of certain characteristics of geek culture itself.

It is incredibly common for professional women to be perceived as less capable or deserving than their male colleagues, and it has a material impact on career success. Employers are more likely to consider female applicants a “bad fit” for promotion if they have a family. Women face social and professional repercussions when they do not fit into traditional models of gender stereotypes. One study even demonstrates that in the STEM fields, women will actually perform worse on exams they previously excelled in when exposed to sexist behavior, because it taps into ingrained beliefs and stereotypes that women are not suited for the hard sciences. Our society primes people to buy into sexist ideas, because hierarchies of power based on differences like gender, ethnicity, income, even geography, are legitimized—and therefore enforced—by the dominant system of beliefs and norms.

However, in the gaming industry, when a woman’s capabilities are doubted, it is tied into social, not just professional, perceptions of qualifications and performance.

The video game industry is an art industry. People who pursue a career in video games do it because they love video games. As a result, companies in the sector are populated with employees for whom, more often than not, work is their play. (Literally.) This has a couple of consequences that ultimately result in women facing a different brand of sexism in the gaming industry than they would in other fields.

A very prominent expression of workplace sexism, regardless of industry, is that coworkers and superiors tend to think positively of assertive behavior in men, but negatively of assertive behavior in women. However, the sexist behavior that stems from attitudes like that may be more pronounced in the video game industry because of this uniquely social and casual nature of the workplace. Informal social work environments allow behavior that would be otherwise inappropriate. The Riot article’s stories were not just about ambient sexism like the glass ceiling, but about individual experiences with more open, aggressive, even unapologetically sexist behavior. Not all of it is malicious, but there’s certainly a lot more sexist behavior out in the open than in other industries. I think that escalated level of sexist expression in the game industry is a result of four main trends we see in geek culture at large.

First of all, geeks have a longstanding cultural self-identity as underdogs, and our community is by nature insular. Being a geek is an exclusive thing because it’s not just about shared interests—nerds get bullied, which is in a way our initiation to earn the “right” to call ourselves gamers. The underdog identity is a very powerful one. I know this. I’m a diehard Philadelphia sports fan. Nothing says “underdog” quite like the Eagles. (I mean this literally.) But I’m also the first to acknowledge that an underdog identity lends itself very, very easily to an “us vs. them” mentality. It begets a really intense level of defensiveness and tribalism or cliquishness, often expressed through exclusionary behavior like gatekeeping.

While gatekeeping is most often associated with gender, it definitely affects men too. A bunch of my friends who are jocks and/or conventionally attractive guys have been grilled about their geeky interests, so it’s not isolated completely to women. The crusade against the “impostor” targets women more, but it’s still an attitude problem that we need to fix on the whole—the idea that to be part of our community, you have to earn it, and the belief that we can’t let “just anyone” in.

Second, our community is predominantly composed of white men, because the media we consume resonates most with that identity. Geeky media is almost categorically directed toward male audiences through historically depicting majority-male, largely-white casts in prominent titles, the in-group of geek circles is arguably cut out for us ahead of time. We care about media much more when we can see ourselves in the pages or on the screen, and emotionally invest more in stories about people with whom we can identify. Therefore, that self-selecting in-group of geeks, mostly white and mostly male, develops a sense of perceived victimhood when teased, bullied, or otherwise mistreated by peers for their “uncool” interests. So we have this insular, exclusive community, mostly made up of white guys, where membership is considered an earned privilege.

Third, we are poised to see women in pretty flat ways because of how they exist in the media we love—in games and comics (and Hollywood, and magazines, and pretty much everywhere), the depiction of women is usually either very sexual, or gentle and pure. And let’s be real, most of the time, women don’t really get the deepest plotlines or characterization, either. This of course is found in movies and even books, but video games are pretty inarguably filled with ladies that don’t get a lot of depth. Sexualized portrayals actually lead to a demonstrated increase in objectifying thoughts and even inappropriate behavior in personal interactions with women. Gender stereotypes in media can even make us more tolerant of real-world sexual harassment.

Fourth, and this might be the most important factor in why sexism in the game industry is so different from standard workplace sexism, is that women are simply not visible in gaming or geek culture. Men aren’t accustomed to women gamers. The most blatant example of this is that they barely have any presence in professional leagues. This can lead to the perception that a woman who says she is a hardcore gamer is either a unicorn or a fraud. However, there are plenty of other reasons we subconsciously don’t associate women with gaming.

It starts earlier than you’d think; young girls are encouraged to have “feminine” hobbies like fabric arts or fashion. Most parents don’t think to introduce their daughters to geeky stuff. Moreover, children often interact with the same sex in their younger years, so boys may not even get to be exposed to girls who do play video games. Society at large makes these rules of what’s “for boys” and what’s “for girls.” This isn’t the fault of video games. Still, in geek culture, it leads to the possibility that we may not see women as being compatible with our shared identity because we don’t have many opportunities to see them as gamers. Girls get bullied for liking video games too, but it’s for more than just being a nerd; girls often get targeted for the additional offense of loving something “boyish.”

That doesn’t mean women don’t play video games as much as men do. The breakdown of male and female players is actually pretty even. Studies show that women and men have the same motivations for gaming, but when women are deterred from playing, it’s because the culture can be toxic, even though they love the game itself. A lot of women gamers don’t speak in voice chat because if they’re vocal, they get harassed more often. Aggressive behavior in online games is very common, and people use racist and sexist insults at disproportionate rates. The inhospitable environment for women gamers often causes them to retreat and not identify their gender, so even if we’re in an Overwatch match with four women and only two men, if they never speak or identify themselves as female, we may just assume it’s six guys. 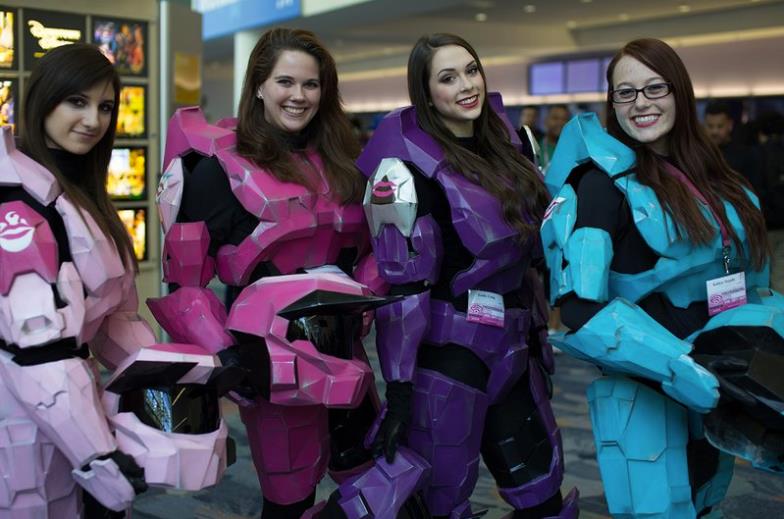 Women are by no means newcomers in the field. They have always been geeks, but they’re just much less visible than men; they’re often invisible in the community of geeks and in the content we consume. It’s a failing of the community and creators both that women have not been given space to shine every step of the way. Of course, it’s never too late to include them and start treating them as our own.

The video game industry is full of geeks. That’s a great thing. We know what we love, we want to create and innovate until the cows come home because we love what we do. However, the insular nature of our communities and the bro culture we unquestioningly proliferate is really harmful to female geeks when it bleeds into the office. It’s ugly behavior in private, and it’s toxic when brought into a work environment.

Women bring so much to the table; they’re just as valuable as men on a team, and I’d actually argue a team made up of women and men is a stronger creative unit. There’s nothing better than having multiple perspectives at the table to come up with really killer ideas. Treating women as undeserving outsiders undeserving, disrespecting their expertise and commitment by seeing them as eye candy, dismissing their valuable contributions to the industry—that does no favors for video games as a whole, nor for the growth of a positive, respected role of video games in art and in society.

August 11, 2018
Looking for a great gaming chair? Not anymore.
Join the conversation!