Are you looking for an otome game with beautiful samurai and tantalizing voice acting? Then perhaps CYBIRD’s “Ikémen Sengoku: Romances Across Time” will keep your summer sizzling hot with romance! The game, originally released in 2015 in Japan, is now available in an English version on iOS & Android! 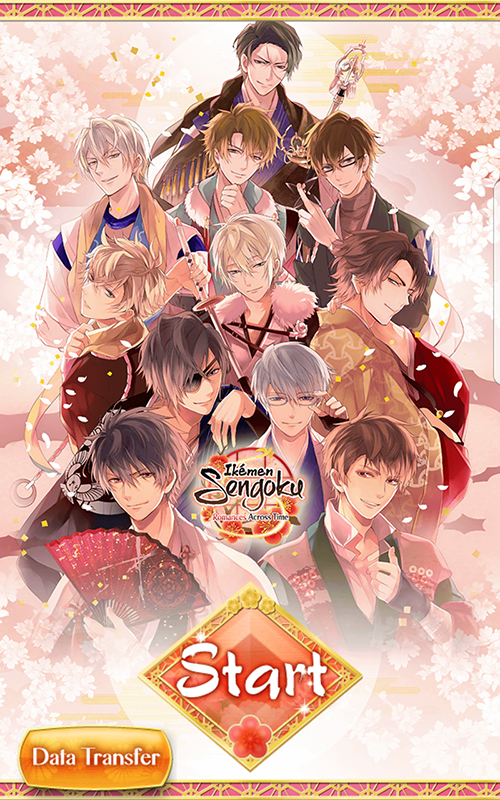 If you’re an avid otome player, you might be familiar with CYBIRD’s Ikemen series. Other titles released in English include “Midnight Cinderella: Ikémen Royal Romances” and “Destined to Love: Ikémen Samurai Romances.” As a huge fan of hot bishounen men dressed in kimonos & armor my curiosity was immediately peaked.

CYBIRD’s describes the game as:

The plot of “Ikémen Sengoku: Romances Across Time” centers around you, an aspiring fashion designer who gets whisked away to “Sengoku” (warring states) era Japan. After earning the favor of warlord Oda Nobunaga after saving him from near death, you must survive 3 months surrounded by Japan’s most famous and handsome Sengoku warlords before your next chance to make it back home.

The prologue for “Ikémen Sengoku: Romances Across Time” introduces the main character (aka “You”) as a smart and independent aspiring fashion designer. I was thoroughly surprised each of the warlords were introduced with a voice acting line.

Once you complete the prologue, you can select between Nobunga Oda, Masamune Date, or Yukimura Sanada for now. I will be waiting with baited breath until CYBIRD releases the other routes (I got my eyes on you Sasuke!). After facing the internal struggle of which one of these tempting warlords I wanted to romance, I decided on Oda Nobunaga. 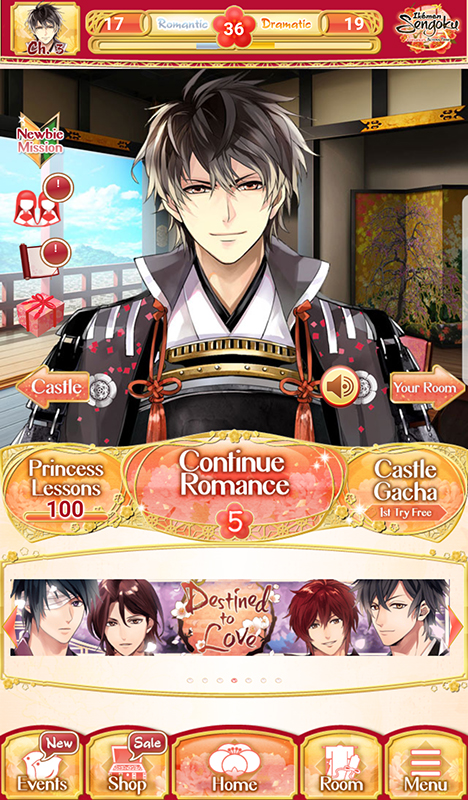 If you decide you want to change your route, the game offers an option to let you choose a different route at any time.

“Ikémen Sengoku: Romances Across Time” uses a ticket system for each segment of every chapter. You receive 5 tickets for free daily with more tickets available to purchase for those who wish to power through the story. During each segment you may be asked to answer questions, and those questions will determine if you get a Romantic Ending or a Dramatic Ending.  I’m still undecided which ending I am going to go for, however, as a fan of a good ol’ dose of angst & feels & suffering oh my I’m aiming for Norabunga’s Dramatic Ending first!

When you’re not busy romancing hot warlords, CYBIRD offers a variety of activities to do in game such as avatar dress up, castle decorating, and Princess lessons. I believe this is where “Ikémen Sengoku: Romances Across Time” shines. There is a lot for you to do when you aren’t going through the story.

Dressing up your avatar increases your Beauty score and there are a wide variety of outfit options you can purchase in their store using in game currency (the premium currency is known a “Coins” which are available to purchase at any time). I love avatar customization so I am a huge fan of this feature–plus the avatars are really cute too! 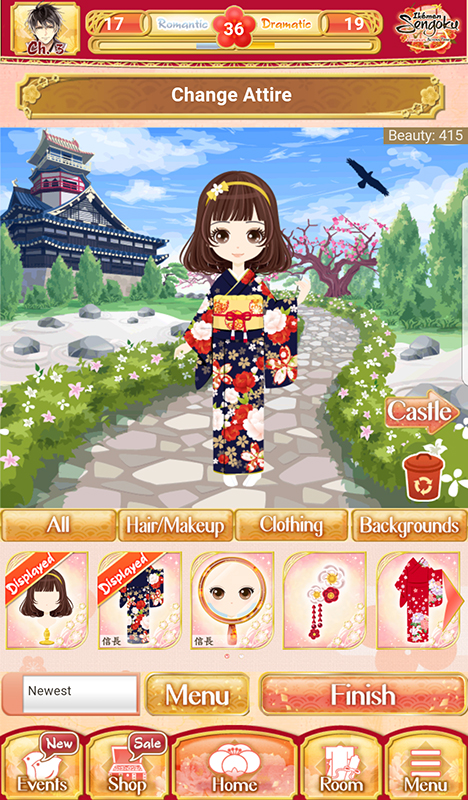 Princess Lessons are vitally important to the story, however, I have to admit this is a feature which I didn’t believe was necessarily explained well during the tutorial. You compete with other users and every time you get an Excellent Bonus, your Grace score increases. Grace is important for Love Challenges which happen throughout the story. If you don’t wish to perform Princess Lessons for Grace points, items which increase your Grace score are also available for purchase. 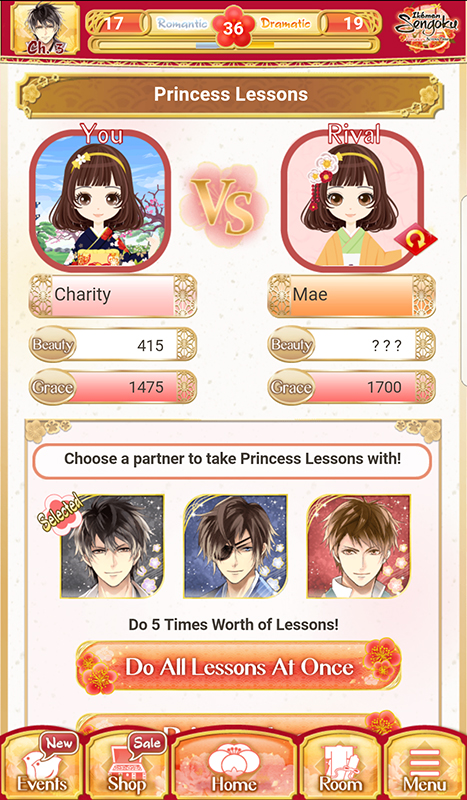 “Ikémen Sengoku: Romances Across Time”  also has the popular Gatcha system in place which lets you win various avatar items, castle decorations, and more. Every day you get a free Gatcha spin, however, more Gatcha spins are available with Gatcha Points which are gained through quests, and also available for purchase. 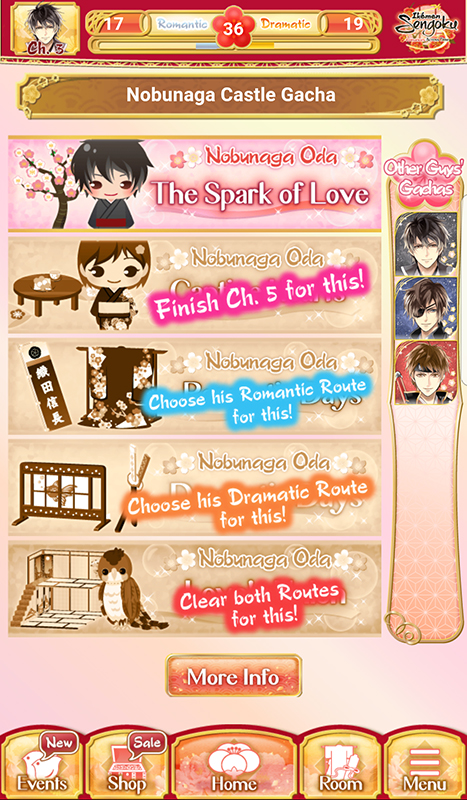 Although “Ikémen Sengoku: Romances Across Time” has a lot of features considered premium, with a little patience this game can definitely be enjoyed by everyone with any budget. I do wish some of the features, such as the Princess Lessons, would have been explained a little bit better, but I am able to overlook that. I get excited checking into the game each day to see where my romance with Norabunga will go and am planning on playing the other routes when I’m finished.

The voice acting for the characters is some of the best acting I’ve heard in the world of Otome, and there is a lot of replay value available in the game. The story, from what I have read so far (as of this writing I am currently on Chapter 3!) has been delightful. It’s no wonder “Ikémen Sengoku: Romances Across Time” has a stage play in Japan, as well as an anime debuting this summer. This game has been insanely popular in Japan, and now it’s time for the West to experience a Sengoku era romance.

Interested in picking it up? You can download it on the App Store or Google Play store!

Are you playing “Ikémen Sengoku: Romances Across Time” as well? Feel free to add me! My friend code is P86VM7YEN.

July 8, 2017
Looking for a great gaming chair? Not anymore.
Join the conversation!