The Doctor receives a mysterious call for help delivered in a package. She and her companions decide to go investigate who may have sent the message. They arrive on the warehouse moon of Kerblam! and get to work posing as new hires. Through their investigations, they find that the robots may be kidnapping human workers who have been vanishing from their shifts. For the most part through, they find happy helpful workers with nothing to complain about. Yaz befriends a worker named Dan. He stops Yaz from going down to the lower levels for work, saying that there have been some strange disappearances down there. She follows behind Dan anyway and hears Dan getting attacked by a Kerblam! robot. She tries to help, but arrives too late and he has disappeared.

The Doctor befriends a sweet worker named Kira, who suddenly gets taken away by the Kerblam! robots. Ryan, Yaz and their other new friend Charlie go down to the shipping levels to search for Kira. Meanwhile, the Doctor finds the first original Kerblam! robot and boots it up to ask it some questions. She asks it for help figuring out why the system may be attacking the workers, and the Kerblam bot begins to search the uploaded code. Suddenly, the little bot begins screaming for help. The Doctor questions the bot and discovers that the Kerblam! AI has taken over and is speaking to her. The AI tells her that someone has hijacked the system and is using it to kidnap workers for a nefarious cause. The Doctor rushes down to the lower levels.

She arrives just as her companions find Kira, locked in a room with a Kerblam delivery package. Kira opens the package, unable to hear her friends outside begging her to stop. Kira takes out the piece of bubble wrap inside the package and pops one of the bubble, creating a massive explosion that kills her instantly. The companions, and Charlie who loved her, are devastated. The Doctor then reveals that a human worker here at the plant is actually responsible for this explosive bubble wrap. They have hijacked an army of Kerblam robots, loaded them with packages filled with explosive wrap, and is prepared to send thousands of deadly packages back to the home planet Kendoza.

Charlie speaks out, holding up a teleport button, ready to send the robots. He is upset that the robots have taken over so many human jobs. He wants to frame Kerblam! and the robots for a malfunction that would kill all the package recipients. He hopes this would spark a distrust in robots and lead to more human jobs. He presses the button and begins to run away through the army of robots.

The Doctor uses her sonic to intercept the teleport button. She instructs the robots to stay in place, and open their packages. The robots comply, sending an explosion rocking through the lower levels of the warehouse, killing Charlie. The Doctor and her companions escape to safety and inform the managers that the problem is dealt with. They leave Kerblam! with the hope that they can rebuild and continue their operation in peace.

Once again, I was less than impressed by this season. This episode has been one of the weakest so far. Only Arachinids in the UK was worse. The writing was so surface level and uninteresting that I found myself rolling my eyes through multiple scenes this episode. The Doctor continues to be a side kick in her own story, letting her companions take the lead and solve the mystery for her. She then gets to swoop in at the last minute with the final piece of the puzzle and ‘save the day’. This season increasingly feels like it’s not meant for me. Maybe newer, younger fans have found a Doctor they can get behind, but for me, this show has lost it’s luster.

Doctor Who has never been a perfect show with flawless episodes every week. But in the past 10 seasons of the show there have been memorable characters, story lines, and episodes. I have so little to point to this season. The only episode I have really loved was last week’s Demons of the Punjab. Something is missing in the writing, and in the chemistry between the companions. Remember rooting for Rose? Falling in love with Martha’s kickass attitude? Amy, Rory, and River? Even Bill Potts and Capaldi’s Twelve had such endearing chemistry. I couldn’t point to a single companion this season and tell you why they are still travelling with the Doctor. There have been no impacting moments between the companions and the Doctor this season. The stories have all been so surface level, safe, and predictable. Something really needs to change in the writers room to find the heart of this Doctor’s story.

This episodes story was so convoluted and…pointless? Even the Fez cameo in the episodes first scene felt forced and emotionless. Matt Smith’s Eleven feels like a lifetime away, a different show in a different time. I was seriously unimpressed by the writing and plotline tropes in this episode. Every turn of the story became more frustrating and uninteresting. Ryan instantly knows the layout of the Kerblam warehouse because…he was a warehouse worker back home? Sure. Killer bubble wrap. Yeah, uh-huh. Come on, Doctor Who can be so much better than killer bubble wrap.

Again, the lack of chemistry and character development makes these companions all but forgettable. I was rooting for Graham and Ryan to overcome their differences and become close friends. And for Yaz to be a more prominent companion. Seven episodes in to a ten episode season and I still feel like I’m trying to figure each of the companions out. Yaz is a minimal plot point yet again in this episode. Ryan and Graham seem to be fine now, but I couldn’t tell you what’s changed in their relationship. I don’t know. Maybe I’m too stuck in the past of the show. Having three companions must be important to the story for some reason? Right? 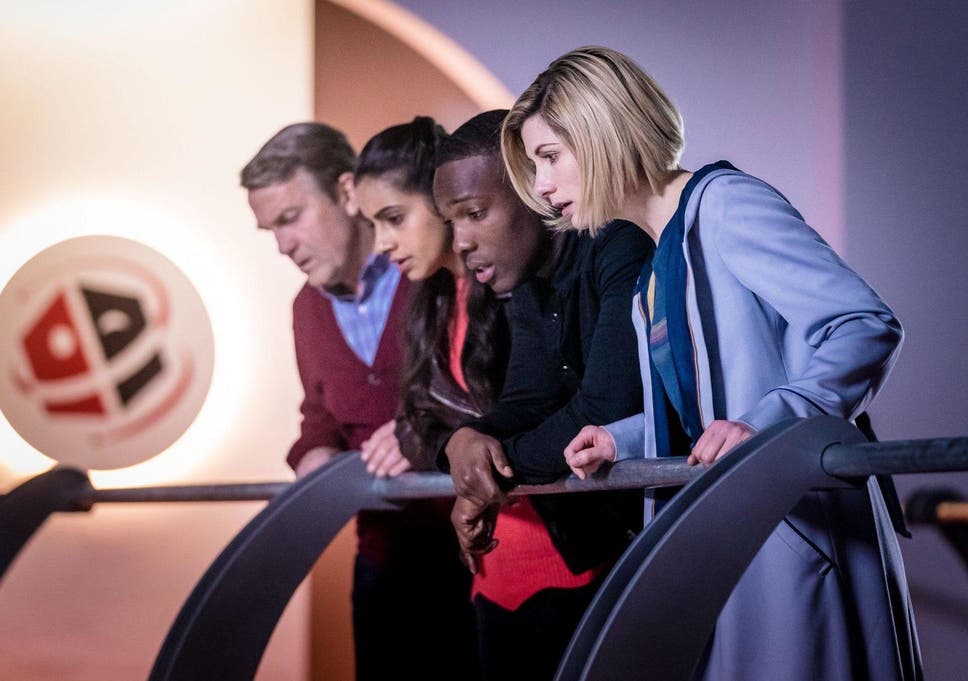 By now you know that the creepy robots aren’t actually the villains of the episode. It is in fact a disgruntled teenaged janitor. Who is angry that robots have taken so many human jobs. So, he’s going to use the creepy robots to kill tens of thousands of people. YUP. That’s our evil mastermind for you. I honestly don’t know what more to say about this…interesting choice. It’s just not my kind of story at all. They talk so much about how the planet Kendoza has been affected by the robot work force. But we never get to see the planet itself. They apparently can afford to buy tens of thousands of gifts from Space Amazon Prime. I’m not even sure if the Kerblam! workers are enslaved, or indentured, or what. They seemed like they were unable to go home and see family, but Kira and Dan were both so thankful and happy to have jobs that I thought they were fine working for Kerblam! And Head of People, Judy was so pleasant and doing an honest job to provide good jobs for the human workers that I wasn’t sure what kind of vibe they were trying to give the Kerblam! warehouse. I never once believed that the creepy robots were the real villains of the show. Sure, they were a little 1984 overbearing, but they were clearly just trying to do their robot best. I don’t know what’s coming down the line for the rest of the season, but I’ve nearly given up on seeing any compelling villains come out of the show.